I know Natasha beads involve slicing, and Sculpey III is probably not the best clay to use when it comes to slicing. But I had this Sculpey III cane of green, brown and white that I’d made when I started claying, and I haven’t really been able to find a use for it, so I decided to just ‘destroy’ it. And what’s a more satisfactory way to destroy clay than to make Natasha beads from it! 🙂 Even if the beads might not turn out fully symmetrical, because not only is Sculpey III so soft and pliable, but it’s already really, really hot here these days… 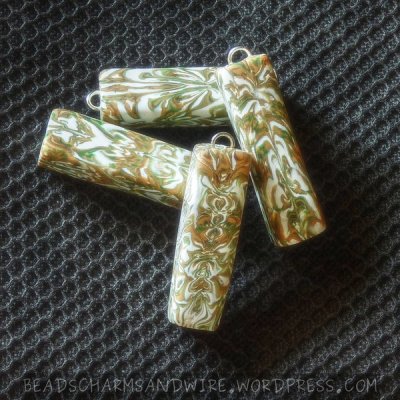 I first thought of making keychain charms from the cuboidal Natasha beads, and they didn’t have to be super-perfect. In fact, I had to cool the clay multiple times in the refrigerator to be able to slice it without squishing it. (It’s still a bit squished, though :) but like I said, I didn’t need the pieces to be perfect.) I attached eye pins before baking, securing the pins by bending them slightly before inserting into the beads.

I sanded and buffed the beads so they’re smooth. (Sculpey III doesn’t ever end up with a shine.) When I showed them to my folks, they thought they’d make great earrings. So my sis picked two beads that are more similar than the others (at least in size — these beads never turn out the same!) and I ended up making an earring pair and two keychain charms!

They’re pretty easy to make, especially if you use clay harder than Sculpey III. Do you think you’ll make some? :)

A software engineer at heart and by profession, I take my creative skills seriously. View all posts by Anita

Unauthorized use and/or duplication of the material in this blog without permission from its owner is strictly prohibited.